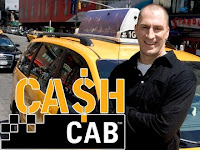 So begins each episode of the Discovery Channel’s hit television game show, where unsuspecting passengers become contestants who get peppered with questions ranging from history to current events. Right answers earn them cash; wrong answers get them dumped back onto the streets of New York.

But who comes up with all those questions? CHASS alum Greg Volk (Multidisciplinary Studies ’03) has not only made a career as a question writer, he’s also won Emmys in the last two seasons for his question-writing prowess on Cash Cab.

Education of a Question Writer

Volk came to NC State from Gastonia, N.C., to become an engineer. “I felt strongly about State. It’s a great school,” Volk said. “Plus my brother graduated from State.”

When he was on the Technician staff, Volk wrote an editorial about the value of an education steeped in the liberal arts. “There’s a very real value to getting a humanities education alongside so many technical and engineering students,” he said. “In a way, CHASS helps NC State work as a whole. Engineering students and the like benefit from being exposed to the perspectives of CHASS students, and vice versa. They need each other to make a complete education possible and to make NC State work. “

Volk’s humanities classes stirred his interests in related fields. He took a screenwriting class with English Professor Wilton Barnhardt. “I’m not a screenwriter, but he inspired me,” Volk said. “He told us to go for what we wanted. He had an interesting career, and that was energizing for someone trying to get their foot in the door.” Volk also values learning the fundamentals of media creation and journalism from professors like Jim Alchediak (Communication) and Bob Kochersberger (English).

Late Show Internship and a Taste of the Big Apple

Two semesters before Volk graduated, he moved to New York City for a semester-long internship with The Late Show with David Letterman. Working on the show opened Volk’s eyes to the possibilities of television writing. “I had decided that I really wanted to be a writer,” Volk said. “That internship allowed me to see how a TV show comes together.”

During his Late Show internship, Volk developed a love not only for writing, but also for New York City. After he graduated from NC State in 2003, he made the permanent move to the city that never sleeps. He started out writing monologue jokes for Letterman on a freelance basis.

Volk spent four years writing jokes from his cramped apartment before landing a job with VH1, where he wrote for several shows, including Best Week Ever. But eventually, pop culture writing began to lose its luster for Volk. It was time for a change. One of his writer friends at Best Week Ever had written for Cash Cab and encouraged Volk to give it a try. “Going from writing jokes about celebrities to writing trivia questions is not necessarily a linear path, but it was a great switch for me,” Volk said.

For the past four seasons of Cash Cab, Volk has drawn on much of the information he learned in college to formulate questions and stump game show participants. “CHASS gave me the knowledge base to build on, and it created in me a curiosity to learn,” Volk said. “It’s important for my job that I remain curious.”

Any event, person, or place can be shaped into a question for Cash Cab, so Volk keeps a notebook by his side at all times. “Even checking my e-mail gets me wondering,” Volk said. “How long is the average e-mail? What percentage of people has never sent an e-mail? Who is considered to have sent the first e-mail? This is my life.” 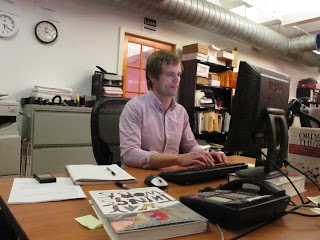 Writing questions isn’t easy. Cash Cab trivia questions often mesh humor with fact to create a fun, unique game show viewers will stick with. Volk spends hours reading newspapers and scouring the internet before he fashions seemingly random topics into questions for the game show. Among the myriad questions he’s written, one of Volk’s favorites is this:

Q: In its Polish translation, what classic novel’s title literally means “Romper in the Grain”?
A: Catcher in the Rye.

Adding to the question writer’s challenge, Volk has to figure out if the question he’s working on—or something similar—has already been written. More often than not, it has. For instance, he remembers stumbling across the fact that Michigan boasts the most lighthouses in the country; because of Lake Michigan, it has the most miles of shoreline. “Sure enough, that question had already been written,” he sighed. “So it was back to the drawing board. “

Writer’s block is not an option, since he is responsible for creating 20 questions per day that will test contestants’ knowledge and sometimes even make them chuckle. “It’s both the most rewarding and most challenging thing I’ve ever done in my life,” he says. “There are only so many ways to write about Howard Taft being fat. You have to dig and dig and dig, and that’s what makes it difficult.”

And although his questions often stump contestants, Volk enjoys watching players get it right and win. 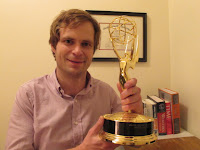 As for earning Emmy awards in 2009 and 2010 for his writing, Volk was caught completely unprepared. “It was really surreal,” he said. “I never imagined myself winning an Emmy. It was a dream I never realized I had until it came true.”

In addition to writing for Cash Cab, Volk is exploring his newfound interest in history as a factoid writer for cable’s top-rated unscripted show, the History Channel’s Pawn Stars. Like many reality shows, Pawn Stars features unique characters and eyebrow-raising antics, but Volk brings the show full circle with information pop-ups that describe the pawned items’ rich and complex history.

For students looking to move to New York or Los Angeles to write television dramas or movie scripts, Volk has this advice: write every chance you get. “Start doing what you want to get paid for now, and write like you’re going to get paid for it,” Volk said. “You’re going to be judged on your work, and it’s going to be critiqued. Sometimes you will fail and get rejected, but you have to put yourself out there and continuously improve yourself.”

And if your travels take you to New York, stay sharp. You never know if the next taxi you get in will be the cash cab, fueled by a CHASS alum’s questions.

Meet Seth Murray, an environmental anthropologist who teaches popular seminars such as "Europe in Crisis."

Audrey White's passion for social justice was fueled by her MALS studies. Upon graduation, she moved to Iraq to work for and among refugees. White (’19) is the the first graduate of our new accelerated bachelor’s/master’s MALS program.